ZPZAZ is a Polish non profit organization of employers which comprises about 80 of all 124 sheltered workshops in Poland.

Our activity goes in two directions.

On the one hand, we act outwardly – we influence social policy in the country and ensure that people with severe disabilities can work and develop safely and steadily in sheltered workshops. We also help all organizations and local governments that want to create a workshop.

During the past few years we have helped to start several dozen new ZAZs.

On the other hand, we act inwardly, we strive to ensure that both the management and the vocational education carried out in our sheltered workshops are of the highest quality and that the services are varied, tailored to the needs of users and stimulate their development as well as active life in society.

Sheltered workshops in Poland. On the way to professionalisation and stability

The people with the most severe disabilities in communist and socialist Poland, like in other countries of this type, were not visible – neither on the streets nor in the workplaces. Neither were they in the public consciousness. Needless to say the previous system lacked institutions that provided comprehensive support, approached individually and respected the UN Charter on the Rights of Persons with Disabilities.

Twenty years ago, the first sheltered workshops started to be set up in Poland, known as the Workshop of Professional Activity (ZAZ – in Polish: Zakład Aktywności Zawodowej).

A few years earlier, on the initiative of parents, a dense network of occupational therapy workshops (in Polish – WTZ: Warsztat Terapii Zajęciowej) had been established in Poland, where the first activisation of people with disabilities was to be conducted. Experience has shown that many of them stayed at WTZs – and still do – for many years.

ZAZs were planned as a link between WTZs and the open labour market. In many places it works this way but in many it unfortunately does not. One of the reasons is that there are still much fewer ZAZs than WTZs. There are a lot of regions, where the only choice for people with severe disabilities is WTZ.  The status of PWD in WTZ is only ‘participants’, in ZAZ they are regular employees with full rights (working 0,55 – 0,8 of full-time) and receiving minimum wage.

Additionally, many people with disabilities in ZAZ have few chances on the open labour market, which is why the path from a ZAZ to a normal company is not guaranteed. Actually the transition rate is very divergent and it depends on many factors, ranging from a few to as many as ten or more percent per year. The location of the workshop is especially important – it’s easier to get various jobs in big cities. Of course, the current level of unemployment is also important – the lower the level, the easier it is to get a job for people with severe disabilities. Finally the financial situation of the workshop is important, too- the better it is, the greater the possibility of releasing employees into the open labour market (more on this subject later in the article).

Whether a PWD gets to ZAZ or WTZ depends formally on the decision of the Disability Assessment Board. In practice PWD (their carers) has to apply for a referral to the WTZ or ZAZ (of course if ZAZ exists in a given place). It is an optimal situation when in the same place there are both WTZ and ZAZ as well as the wide access to OLM.

In recent years, newly established social enterprises (SE) have proved to be the target workplace. The main difference to a ZAZ is, that SEs must employ at least half of the people at risk of social exclusion (not only people with disabilities) and workshops must employ at least 70 % of the people with the most severe disabilities. However, unlike ZAZ, the SEs no longer receive subsidies from the State after the initial period (max. 1 year). Then they bear the full economic risk. 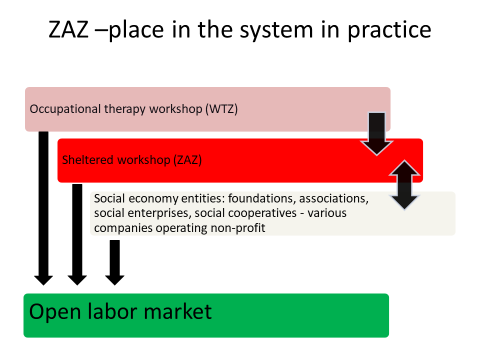 Polish ZAZs were inspired by German sheltered workshops. Still one of the Polish regions (the Greater Poland) has a strong cooperation with Lower Saxony. Initially, ZAZs were established by local government, then more and more often by NGOs – which was connected with the development of civil society. As a result, there are two types of ZAZs in Poland: on the one hand established by resolution of  local selfgovernment – they are the unit of local selfgovernment, like e.g. job agency or centre of family support, on the other hand created by NGO’s. What has to be underlined both have the status of a professional sheltered workshop (given by voivod) and are companies which run economic activity.

Of course both have the same mission: “The sheltered workshop organizes vocational education and social rehabilitation for people with the most severe disabilities, employing those people in the production and services, aiming to improve their living conditions, or even to prepare them for the open labour market”.

All the ZAZs offer their users the same working conditions. E.g. buildings and facilities used in the workplace are safe and adapted to the needs of people with disabilities, the workshop provides emergency medical care, guidance and rehabilitation services. Employees with disabilities work only 4 to 6 hours a day. In addition  they have everyday rehabilitation (60 minutes). Polish ZAZs realize the Individual Rehabilitation Program and if it is possible a plan of the employment with another employer (thanks to the efforts of ZPZAZ all the ZAZs use a unified scheme of this program). Profit from economic activity is transferred to Company Activity Fund. Its use is decided together with employees with disabilities. It can be spent – for example – on improvement of their working conditions, purchase of equipment which help the people with disabilities to live independently and participate in social life in the local environment, further education, recreation and participation in cultural life and training them before employing in new places.

Most of the ZAZs try to get an employee to do an internship with a new employer before the transition. Our association calls for the opportunity to return to the workshop in case of failure in the open labour market.

They also share identical financing structure. The state gives 75% of the money needed to set up ZAZ. That means for renovation and adaptation of the buildings, buying machines and not much more. The rest of money and the building itself must be provided by the organizer, which in each case is the initiator of the ZAZ’s establishment. Nevertheless there are more and more ZAZs created, which demonstrates the determination of local society and effectiveness of ZAZs association’s actions. The federal state co-finances current activity of workshop theoretically up to 90%, but in practice every ZAZ has to produce bigger and bigger income to cover expenses. The money is given by the state through the marshal

It gives rise to a serious problem. The best workers with disabilities could look for a job on the open labour market (of course with support of ZAZ) but they are necessary to maintain the financial flow of ZAZ. Without stability polish ZAZs cannot fully realise their mission. That is why ZPZAZ fights for constant level of financing.

Despite these limitations, all ZAZs in Poland support their users in finding a job on the open labour market as well as support and prepare employers for it.

A common problem of all ZAZs in Poland is the repeatedly amended and still incoherent regulations concerning people with disabilities and recognition of a certain degree of their disabilities. Unfortunately, in Poland it is still decided by biological and medical factors, not functional ones. This is the most important reform that the Polish ZAZs community has been calling for for many years.

Despite so many similarities, Polish ZAZs differ in many aspects. First of all, the size (from twenty to a more than one hundred users) and type of activity. The following branches dominate:

Single ZAZ can operate in the most surprising fields, like ecological agriculture, call centres, artistic smithery.

A new user first goes into a department with lower requirements, mostly the assembly department. Here, he learns the daily rhythm of work and rehabilitation as well as teamwork. Only then is he directed to a particular department, depending on his abilities and wishes. In recent years, a holistic approach to people with disabilities has become dominant in Polish workshops. Their offer also includes training apartments (where People with Disabilities learn independent life in a flat), leisure activities, access to culture and much more.